Kirsten Pagacz is the founder of Retro-A-Go-Go, an online seller of retro kitsch. She suffered from OCD for two decades before discovering that it had a name (and a cure). Before founding her own company, she worked in marketing and sales for a number of Fortune 500 companies. 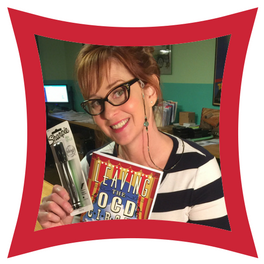 She is a member of the International OCD Foundation and won first place in one of their art competitions.

When I was nine, I started developing obsessive-compulsive disorder (OCD). And I lived in its grip for over twenty years. People without OCD often ask me what it feels like. Imagine you have to build a house of cards, your OCD is the blowing fan right next to it. You can’t stop yourself from building the house of cards because your brain has a hiccup, and the fan will never shut off. And, oh yeah, there is someone holding a gun to your head demanding that you perform perfectly. Frustrating doesn’t come close to describing it, but complete madness does. I have learned how to stop building the house of cards, doing what my OCD tells me to do, and most importantly, I have shut off the fan.