People sometimes say things like “I’m OCD about” a task when really they just mean they’re conscientious about it. OCD, though, is something else entirely. Can you explain the difference?

OCD is not just having a preferred way of doing things; it’s a medical condition that is incapacitating, where your brain is misfiring and your serotonin (a brain chemical) is out of whack. Severe and frequently debilitating anxiety is a result of having OCD, as compulsions and obsessions carry a life-or-death mentality for the sufferer. The compulsions are done to stop the obsessions and get temporary relief.

An OCD sufferer spends enormous amounts of time feeling trapped in a maddening mental loop of obsessions that they would literally do anything to stop, no matter how strange the action or compulsion may seem to be. The overwhelming thoughts (obsessions) and rituals (compulsions) associated with OCD cause distress and get in the way of daily life.

Many inventors and scientists also suffer from OCD, but can channel it toward an obsessive drive to create. It makes them difficult to get along with, but doesn’t society need people like this?

Does society benefit from our artists, writers, mathematicians and scientists that obsessively work at their craft? Certainly. However, I would bet that any of those individuals would trade some of their end product for having a healthier and well-balanced life with family and loved ones. I believe that you can make wonderful art or create wonderful things including the welcomed relief of not being tormented by a mental bully and tormentor: OCD.

Why do you compare OCD to a circus?

I chose the word circus, to imply a dark, hellish, nightmarish circus. Although I craved peace and serenity, my OCD circus was filled with heavy lurking shadows of depression, repetitive, maddening loops of chaos, sadness, and anxiety. My tormentor was like the meanest, wildest monkey running around my head, constantly looking for ways to bite me. My relationship with my tormentor, OCD, was like tacky, pink-bouffant-like cotton candy, providing no nourishment to the mind or the soul.

Can OCD be “cured,” or is it a matter of controlling and mastering the obsessive rituals?

The words “mastering and cured” don’t fit for me, they seem too lofty and pretentious. It’s more like over many decades I have learned a great deal about my OCD, and its inner workings. I’ve read many books, met with many doctors and put into daily practice what I have learned. I have whittled my own key out of my OCD prison and in my book, Leaving the OCD Circus, I teach other fine folks that are struggling with OCD how to do the same thing for themselves, so they can get onto their big happy lives much faster than I got to mine.

You struggled with substance abuse. Is that common among OCD sufferers?

I think finding an escape route away from pain is what people who suffer sometimes do. I do know that from what I’ve read, many people with undiagnosed and untreated OCD self-medicate. I would do anything to turn down the circus noise and get the monkey to stop biting even if it was just temporary. Drugs of all kinds are sometimes a distraction from pain. I believe my father suffered from undiagnosed OCD. He heavily medicated himself to blunt his own obsessive thoughts and runaway mind.

How did you feel when you realized that you had, at last, overcome OCD and you’re controlling it rather than the other way around?

I took my mental bully down piece by piece, and I teach my readers how to do the same thing. Sure, I may still have OCD triggers that rear their ugly head from time to time, but I remain in the driver’s seat of my life, and monkey is in the sidecar and not the other way around. My path is of mental health and overall wellness. Life is too rich and too wonderful to have it crushed by any sort of illness or condition, especially one that you CAN DO something about. I value my time and my life so much—I cherish it—and I keep doing the work that keeps me in the driver’s seat and OCD in the sidecar.

OCD might pipe up and I say, “Don’t you want to check the stove one more time?!”

“Not today OCD, not today!”

What would you recommend readers do immediately if they feel OCD has taken control of their lives?

The first thing is to realize that OCD is not your fault; it is a real medical condition. Hopefully this comes as a big relief! A great place to start is by visiting the International Obsessive Compulsive Disorder Foundation’s website. There is a wealth of information on their site. You can visit their website anonymously if you wish. It’s a really great resource. You don’t have to be isolated. There is a whole community of people just like you. Also you can find OCD specialists in your area and sign up for their terrific and highly informational newsletter. 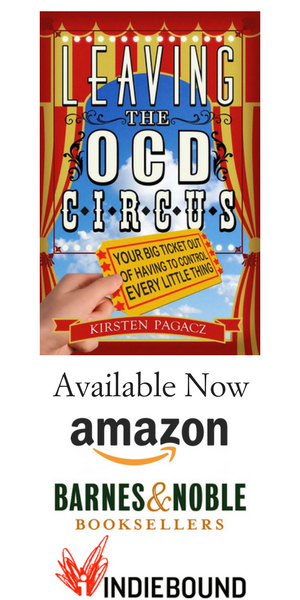